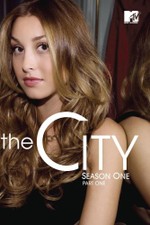 The City is an American reality television series that originally aired on MTV from December 29, 2008 until July 13, 2010. Developed as the spin-off of The Hills, the series aired two seasons and focused on the personal and professional lives of several young women residing in New York City, New York. Its premise was conceived by Adam DiVello, while Liz Gateley served as the executive producer. The series originally focused on Whitney Port, who appeared in its predecessor, as she began employment with Diane von Fürstenberg. It additionally placed emphasis on her workplace rival Olivia Palermo, Port's boyfriend Jay Lyon, his roommate Adam Senn, and her friend Erin Lucas. The latter three were replaced by Port's roommate Roxy Olin and Palermo's enemy Erin Kaplan for the second half of the first season. The City received generally mixed reviews from critics, and proved less successful than The Hills. Like its predecessor, the series was often criticized for tending towards a narrative format more commonly seen in scripted genres including soap operas, and appearing to fabricate much of its storyline. The show has distributed all seasons to DVD.

Takin' Over the World
The Pussycat Dolls
BandaSonora
Contacto